A few weeks ago, we gave you what we knew about the new Gaither Vocal Band CD releasing this fall.  That article can be found here, but NOW we have more details for you!

First of all, as we suspected, the title of the CD changed.  The working title was initially Simply Acoustic but after putting some more heads together, it was decided that the title that better describes this particular recording is —  *drumroll please* — Pure And Simple.  This title truly is a great summary of what the recording is about – simple tracks that bring out the purity of the GVB harmonies and the truth of each song.

Once the title was settled, we could finish the cover art!  So here is what the new Gaither Vocal Band CD will look like: 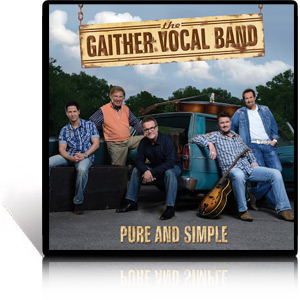 What songs are going to be on the recording, and in what order?  Well, that is the one thing we’re still working on, but we are SO CLOSE!  Once the tracks and sequence have been finalized, this recording goes to manufacturing and you can start reserving your copies.  Believe us when we say, you will want to be among the first ears on this planet to hear this unique, groundbreaking Gaither Vocal Band CD.  So stay tuned.  We will let you know the minute you can start preordering.

In the meantime, Wes Hampton has shared with us his thoughts and reflections on this new GVB project. Enjoy learning a little about the creation of Pure And Simple from our own GVB tenor!

I’ve had folks ask me about the style of this new recording. Is it bluegrass? Is it country? No. The GVB has not gone bluegrass or country on this new CD…not that there’s anything wrong with that. 🙂  What we HAVE done is simplify everything. No vocal stacks, no big and fancy tracks. Just pure and simple music. Vocals are front and center and the tracks are acoustic-driven and stunning. I guess if I had to categorize the style of this new record, it would be Appalachian meets heart and soul. It’s a perfect marriage of art and heart.

Ben Isaacs is so brilliant at this sort of thing. He rounded up the best players for the type of project we were aiming to do and the result is magical. This project is so much fun! In fact, this is the first GVB record that has more upbeat tracks than ballads. This could be the best thing the GVB has ever done. Bill has done a great job of equally distributing the leads to Mark, David, Michael, and me, so I think people will get a good taste of what everyone brings to the table individually.

In total, 17 tracks have been cut. To my knowledge, around 14 will make the final cut. It all comes down to what best fits this project. We’ve recorded brand new arrangements of the GVB classics, “The Old Rugged Cross Made the Difference” (featuring Michael) as well as “Rumor Mill” (featuring Mark). Both are fantastic!  People have asked me via Facebook and Twitter about a song called “There’s a Whole Lotta Shakin’ Goin’ On.”  This is NOT the rock and roll song with which most of you are familiar. It’s an original song lead my Mark. After hearing his performance (produced by Michael), I think it’s one of his best vocal performances I’ve heard. Some people have heard another one of our new songs, “Winds of This World,” during the GVB concerts. I LOVE this song. Michael delivers it in the way that only he can deliver something. Talk about a great groove! I’ve also had many questions about the song, “One Voice,” that we have been singing at GVB concerts. Unfortunately, “One Voice” will not be on this CD. We ARE planning to use it for something else, though. Patience, grasshopper…

A new song that was tracked this week, called “I’ll Pray for You,” is so powerful. Have you ever been (or known someone) in a place of so much pain, desperation, loneliness, or fear that you just didn’t know what to say or do? This song is for you. Sometimes all we can do for someone who has lost so much is to simply pray for them. There are not enough words in the English language to soothe the hurting hearts of a mother and father who just lost a child. All we can do is bathe them in prayer, asking the One to heal their wounds.

“The Love of God” (how rich and pure) is another highlight of this project. We can never stop talking about the love of our Father. It is an unbelievable thing to begin to comprehend. One thing we will never stop singing about is the love God has for EVERY ONE of us “good” or “bad.”

We can’t wait to finish and release this new CD. We’ve still got so much to say (and sing) and we thank you for allowing us the privilege to do so!