“One of my favorite poems, which I have prominently mounted on a plaque on my office wall, is Rudyard Kipling’s classic “If.”  The poignant piece begins with the statement:

If you can keep your head when all about you
Are losing theirs and blaming it on you;
If you can trust yourself when all men doubt you. . .

“The poet provided a profound insight when he said,

If you can meet with Triumph and Disaster
And treat those two imposters just the same. . .

“Interesting isn’t it, that Kipling regarded both triumph and disaster, success or failure, as imposters.  Kipling also described keeping one’s head in the face of success, which is sometimes the more difficult task:

If you can talk with crowds and keep your virtue,
Or walk with Kings—nor lose the common touch,
If neither foes nor loving friends can hurt you,
If all men count with you, but none too much;
If you can fill the unforgiving minute
With sixty seconds’ worth of distance run,
Yours is the Earth and everything that’s in it,
And—which is more—you’ll be a Man, my son.

“…I often tell young artists who come to me when they are discouraged, ‘No matter how it looks or feels, things are not as bad as you may think.  You’re not losing as much as it seems you are right now, even though you feel as though everything you’ve ever hoped or dreamed for has gone down the drain.’ I watch as the younger artists’ eyes light up, and then I’ll say, ‘And can I tell you something else? You weren’t nearly as hot as you thought you were a short time ago.’

“Most of them smile and say something such as, ‘You’re right. I thought I was bigger than I really was.’

“I am convinced that God looks at us much the same way. He doesn’t get overly impressed with our successes, nor is He overly depressed by our failures.  He is still the same whether we are on the mountaintop or trudging through the valleys of life.  I love stories of faith about real people who have had hard times as well as great times, because that is more true to form for most of us.  Most people don’t live perpetually on the triumphant experiences of life.  Similarly, I love songs such as the one written by Tracy Darrt, “God on the Mountain,” because it helps me to keep the good times and the tough times in perspective:”

Life is easy when you’re up on the mountain
And you’ve got peace of mind
Like you’ve never known,
But when things change
And you’re down in the valley,
Don’t lose faith for you’re never alone.

We talk of faith when we’re up on the mountain,
But talk comes easy
When life’s at its best,
But in the valleys of trials and temptations,
That’s when faith is put to the test.

These words are excerpted from Bill’s biography, It’s More Than the Music (Chapter 8). 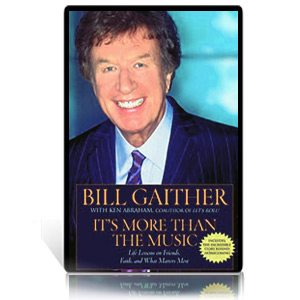 It’s More Than the Music is co-authored by Bill Gaither and Ken Abraham. Copyright © 2005 by The Gaither Charitable Foundation, Inc. Published by Warner Faith, A Division of AOL Time Warner Book Group.