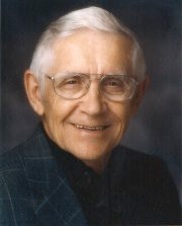 We are sad to learn that one of gospel music’s most outstanding songwriters, Mosie Lister, passed away on Thursday, February 12, 2015.  He was 93 years old.

Mosie was GMA Hall of Fame inductee, wrote such incredible classics as, “Then I Met the Master,” “Where No One Stands Alone,” “‘Til the Storm Passes By,” and “How Long Has It Been?”  As of 2014, there were more than 700 songs and arrangements in his catalog.  His songs were recorded by legendary artists and groups such as Elvis Presley, George Beverly Shea, The Statesmen, The Blackwood Brothers, The Cathedrals, Loretta Lynn, Merle Haggard, Porter Waggoner and many others.

Bill Gaither reflects on the life and work of his long-time friend and hero, stating: “I can think of no one who better fits the term ‘Christian gentleman’ than Mosie Lister.  He was a sensitive, caring man of integrity whom I have long admired both as an individual and as a writer.  And nobody wrote to the generations like this fine man. He was speaking to his generation in the 40s and early 50s when he first started, and his songs were still relevant after the turn of the millennium.  It takes a special kind of soul to come up with lines like, ‘I don’t know a thing in this whole wide world that’s worse than being alone… Hold my hand all the way, every hour every day; come here to the great unknown.’  He had a gift.  And he was a gift to everyone who knew him. We have lost a giant in the field of gospel music.”

The Gaither Vocal Band has recorded and performed Mosie’s compositions many times over the years.  Here, in memory of Mosie, we bring you his wonderful song, “Where No One Stands Alone.”